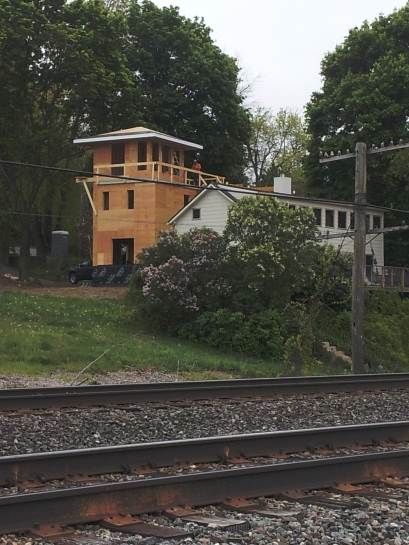 Putting the top on the tower was not a celebration, but we all seemed to know something special had happened.  The Tower looked good.  It was high up and the crow’s nest measured 11 feet by 11 feet.  Like a sailing vessel, it was designed to withstand stress from the winds.  And it was windy.  Dave and his crew came every day, always shaking their heads because the wind didn’t blow until they reached my street.   I had very little to do with it – the wind and the work. 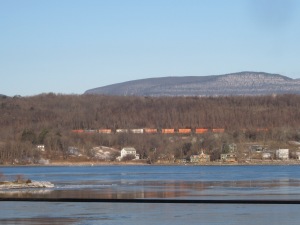 Everyday the sun was shining and the sky was crystal clear and bright blue.  A north and a southbound Amtrak train with a shrill whistle passed by almost every hour.  Throbbing tugs pushed barges up and down river.  The trees were not yet full, and we could see and hear freight trains across the Hudson several times during the day. It was bass season and people came to fish from the park or from boats that they launched from the landing.  Families came for picnics.  Couples came to kayak.  Men came to pee. There was a lot to see and take in.  And then there was the wind.

Working in the wind was exhausting and the crew was tired by the middle of each day.  But they were definitely having an adventure working on this house.

Duke, our architect, had given the plans to his engineer to make sure the wind would not rip off the roof.  Perhaps I had put too much emphasis on the wind?  When Dave studied the final plans he thought it was overkill and I’m sure he was thinking money and how to reconcile the increase in materials and time with the quoted cost.  I’m sure Lee was annoyed with me for being so obsessed with the wind, because he now had some hard drilling ahead of him.

The hurricane-proof construction made it difficult if not impossible to build the tower’s deck — which is the second floor roof — with enough of a slope so that rain and snow could run off easily. At least that’s how I understand why we will have to be diligent about removing water from our roof deck.  We also are currently trying to decide how to best attach both gutters and railing posts to the edge of the deck.  This might always be a problem with any type of construction, but if it were, I would think there would be several routine ways to deal with the situation from which to pick.

Fortifying the roof, however, was the right thing to do.

We’ve had some very windy days and nights since the tower has been up.  We hear the wind blowing through the passage under the bridge and around the two structures. The noise is a bit disconcerting.  We still haven’t learned what is normal.  We woke one morning to discover two saw horses had blow over the side, thankfully not hitting anything or anyone.  Our main criterion for choosing furniture and potted plants for the deck is that they be heavy.

During design phase I talked about how nice it would to leave the ceiling open on the third floor.  Nobody joined in the conversation.  When we actually got up to building the third floor I brought it up again, and again received no encouragement. Perhaps then, I suggested, could we have a cathedral ceiling?  No takers there.  I thought mmhmm and crawled back into my hole.  When I finally saw how hardcore the rafters and beams were in the peak, I understood a little better.  Yes, I could have insisted. It would have taken a bit of time and patience to come up with an attractive pattern and a search for quality, but, after spending the past few days painting trim in the room, I am content with the ceiling. 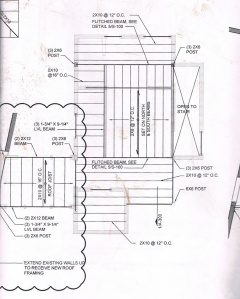 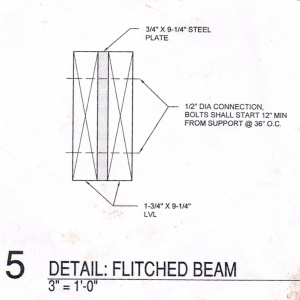 Due to the high cost of labor, use of this type of beam has greatly declined.  The advent of high- strength engineered lumber which uses modern adhesives and lower cost wood fibers has rendered this system largely obsolete.

Dave seemed to love challenges. Hopefully his memory of constructing a roof based on an obsolete concept and building it in the wind, will evolve into one of the stories he tells for a long time.  It will be something I speak of with a fond memory. Doing something the “old-fashioned” way gives me a buzz.

I’m still not comfortable with the deck.  The roofline does not extend far enough over the deck to protect it from the evening sun and the rain can come in the windows because of the wind.  Double hungs would have allowed me to open just the top window and the overhead would probably have kept the rain out.  Sliding windows would have given us more room to walk on the deck when the windows are open.  It’s tight especially on the northwest corner.  But I like casements and if I wind up being unhappy, I’ve only got myself to blame.  The surface of the deck is made of some space-age elastomeric and fabric combination that has yet to prove itself, and the color is not one I would have chosen.  Why do we need such a big deck in the first place?  These concerns and doubts may vanish after our first summer enjoying it.  I no longer think about what color I might have liked.  I’m keeping an open mind and hoping for a small container garden on the southern side and beautiful sunsets with a glass of wine. 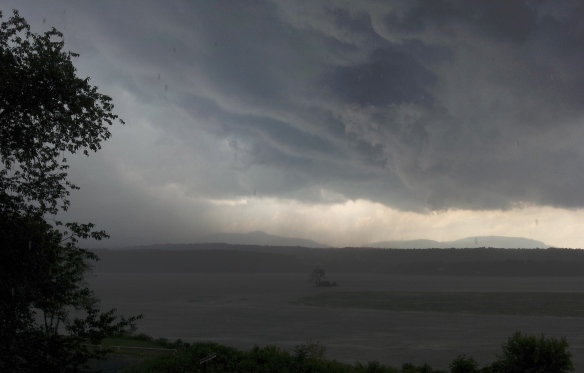 It is really a wonderful space.  I want to be up there looking out at the river and the mountains while I enjoy my morning coffee, while I work at my computer, while I curl up on a couch and read, while I lie in bed and gaze up at the stars, when I wake up and see the sun reflecting off the snow and ice or the colors of the autumn.  I want friends to enjoy it.  I want it for Lee’s and my private nest.  It has less than 100 square feet of floor space, barely enough room for a bed let alone a couch and a table and chair.

Lee reminded me:  “You wanted it this small,” and he is right.  I love it.

Can’t wait to move in.