Every summer a group of about twenty high school students, mostly Jewish, from Bayonne, Jersey City and Hoboken met every day on the beach at Tenth Avenue in Belmar. One year, 1966?, someone started reading holocaust stories out loud.  I took the photo above.  That’s not me front and center. 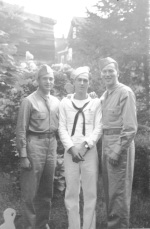 I knew about the Holocaust. I had read Anne Frank and had seen the movie. My father, he’s on the left, and uncles had fought in the war, although none in Europe. Family of friends had numbers on their arms. 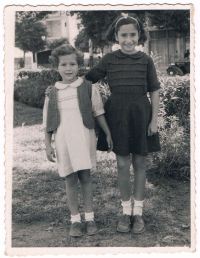 Distant cousins would write to us periodically telling us about their lives and asking us for financial support. They had escaped from Hitler — I do not know if they were in the camps or not — but they had made their way to Israel. There were two girls, Tamara and Shulamith, about my sister’s and my age. That is them to the right in Tel Aviv 1954.  My mother always got upset when these letters came, and there would be whispered conversations between my mom and dad.

My mother always made me feel as though it could happen again — Jews being rounded up and imprisoned or killed, anytime, anywhere. It is true that one morning we woke up to a swastika drawn with snow on the gate to our backyard. We believed but never were certain that the children who lived on the corner and who attended St. Andrew’s did it. After all, the nuns at St. Andrew’s used to walk their students to the corner after school to make sure they didn’t stop at “the Jew” Lennie’s candy store. 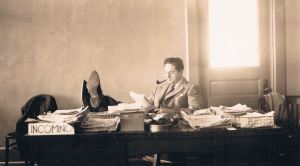 Mom distrusted anyone who was not a member of the tribe. She spoke of Jews not being served in restaurants, not getting jobs. We knew of families who had changed their names. I’d come home from school during the McCarthy era to find her glued to the television set, and many evenings I would hear her talking to my father, who was the token Jew in his department in the Civil Service Commission. She feared he and some of their friends would be called up before the committee. Who knew what to think? I was young.

I was sucked into the Holocaust readings with fascination and horror, and felt we were doing something that our parents — at least mine — would not approve. Even many years after that summer, my imagination was filled with images of blond, blue-eyed men and women with thick accents opening up my stomach to see if the monkey sperm with which they had tried to impregnate me had created a monster. Or they would take away my glasses and since I was minus 16 in one eye and minus 18 in the other I would be useless and they would send me to the showers. 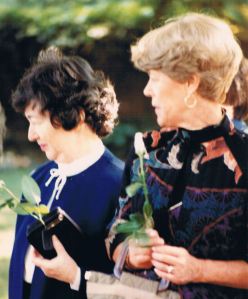 As my life became more my own these nightmares disappeared. My mom relaxed too. She welcomed into the family a “very nice” Protestant son-in-law with parents who, she was surprised but relieved to discover, had similar values and life-style to hers. There she is with my husband’s mom at the our wedding.  She lived in senior communities with few Jewish neighbors and fewer if any Jewish staff on which she grew to depend. She sang the Jewish holiday songs and relished the holiday meals and lit the Sabbath candles. She sang Christmas carols and enjoyed the lights on the Christmas trees. I hope her heart softened and she was less afraid.

But now I think mother might have been right, and I was naive.

It would do us all good to spend a summer reading about the Holocaust and the millions killed in genocidal wars in Korea, Rwanda, India, the Ukraine, Algeria, the Congo, and, and, and. We might read about how self-righteous white men in our own country treated the Native Americans, and how they pulled Africans from their homes and made them slaves, and how they now, every day during this tedious primary season, spew hate and bigotry as a mainstay of America’s exceptionalism.

Our world is diverse. Let us one day rejoice in these differences and recognize the infinite possibilities they offer. Let us one day work together for the benefit of all mankind and this remarkable, beautiful, rich world we live in. 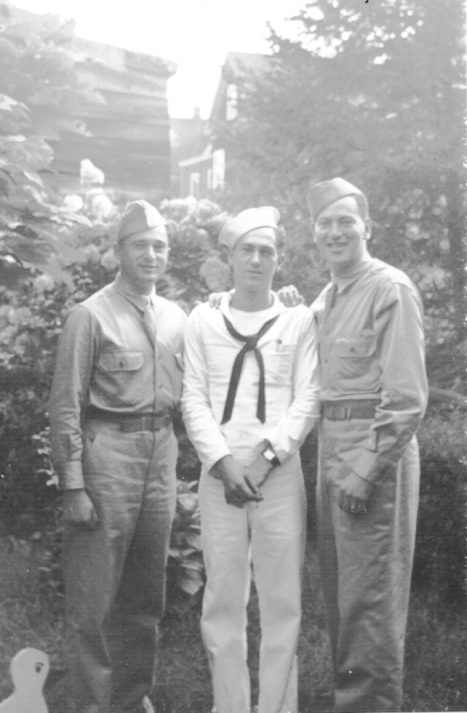 Several years ago my basement flooded and many of the family treasures were lost or damaged.  The days of sifting through papers were bittersweet.  My twenty-something boys came up for a long weekend to go through the boxes I had marked as “Morgan’s Life” and “Alex’s Life.” They contained drawings, writings, school papers, letters, whatever I thought precious enough to save for them when they grew up.  It was a sad and joyful weekend of hard work — emotionally and physically. My sons were amazed at how clever they were as little boys!  They told me they would love to go through the papers again, but not until the next flood.

Here’s a gem I found among my father’s papers.  It’s an undated letter from my mother’s sister’s boyfriend to my father during the war.  My mom and dad are Mil and David.  Her sisters and their beaus are Thelma and Eddie and Shirley and Elliot.  The little girl is my older sister.

I hope this finds you well.  I am alive.

Hey, don’t call me those names.  I’m lucky if I can write a note home now and then, beside the fact that we are now not allowed to say anything.  We are busy — to make a terrific understatement.

I guess you must have heard of my good fortune – the thirty day leave.   It was like water to an old desert cat in a sand storm or land to a sailor in any kind of storm.  In short and to put it mildly, it was great. 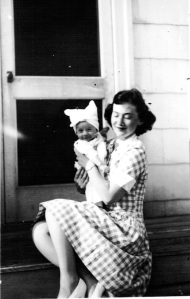 Now comes the flattery. Dave, you are the luckiest guy in the world, that kid of yours is just a dream, she’s beautiful.  She’s got more sense than I have (maybe an insult but considering her age).  She’s so sweet you could just eat her up.  I spent half my time with her.  I just can’t put into words what I thought of her.  For the first time in my life I can truthfully say that I love a child. She’s not like the run of the mill.  She doesn’t cry and pout all the time or make a pest of herself.  In a nutshell, she’s wonderful.

I came home fully intending marriage in a year of receiving 20% sea duty pay and all I only saved about $250.  As you can see, that is nothing to boast of.  In the past few mos. in the Pac. I have saved easily that much.  I got 2nd class giving me $96 base pay & 20% plus $10 for extra service (running motion picture equip).  I save about $86 per month, I could do worse.  So we got engaged.  All of which leaves me very unhappy, because I have been kicking myself ever since for not getting married when I was home or not saving dough when I could, well no use crying over spilled perfume. 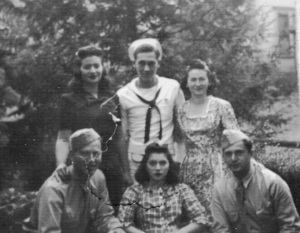 Getting back to an interesting subject, everything at home is as well as could be.  I saw your family a few times and Doris quite a few, all fine.

Getting home to serenity and peacefulness is quite a shock though pleasant. I hope you can experience it soon.  I know that whenever Mil or Shirl looked at me they saw you & El, but it was beyond my control, though I wish it weren’t.  I probably caused them more grief than happiness by my very presence.  If so I’m sorry, but I just hope you get home first this time just to square things.

If possible let me know where you are now.  Take care of yourself, 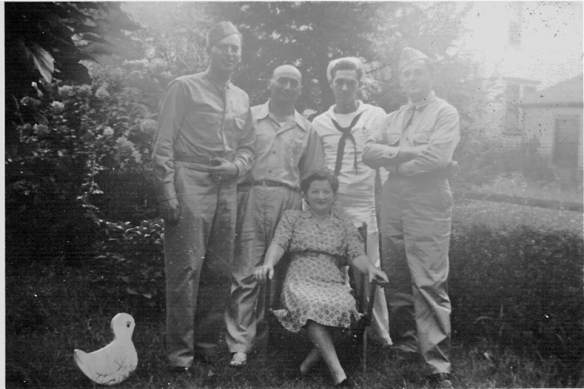 Elliot, Eddie and David with the parents of the sisters, their loves, 9/5/1943