Bard Conservatory Graduate Vocal Arts Program and the Conservatory Orchestra treated us very lucky people at the Fisher Center on March 4th to a glorious evening of talent, beauty, cleverness, and adorableness.  An evening to lift one’s spirits. One month later I am still bubbling with broad spectrum happiness, awe for the cast, the crew, the musicians, the set and costume designers, and Nicholas Muni, stage director and production designer. Every time Jennie, the Sealyham terrier, shook her little tail, I got goosebumps and giddy and the next day watching my own silly little stiff-legged, ragamuffin Brino who barks too much, the two became as one. Brino, just like Jennie, believes that there must be more to life than everything.

You must wonder what am I talking about.

I am talking about a night of two extremely different operas: Higglety Pigglety Pop with music by Oliver Knussen and story by Maurice Sendak, and The Magic Flute Redux by Wolfgang Amadeus Mozart and Emanuel Schikaneder, sort of. Muni, in the Director’s Note asks us to “embrace the redux on its own terms. . . as a second presentation in the World Mother Goose Theatre”. After her own starring role in Higglety Pigglety Pop, Jennie and her new friends at the Theater perform, attend and comment delightfully on the condensed Flute.  Dawn Upshaw, Director of of the Vocal Arts Program, helps us understand the link between the two operas.  “They both reflect upon an essential need among all humanity — a yearning for meaning and understanding of things outside our own experience.”

You still might be wondering what am I talking about. 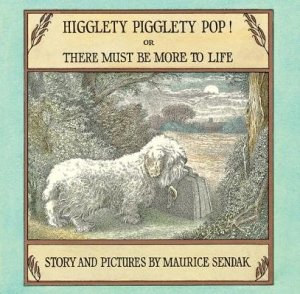 Have you read Higglety Pigglety Pop by Maurice Sendak? If not, I suggest you get a copy and read it once, read it twice, and then read it to every little boy or girl you might know and to grownups you love who still have a spark of childhood in them. Sendak is an award winning children’s book author and illustrator, one of my favorites, and this small square picture book with line drawings has now become one of my favorites too.

Sendak is a master at pictures books and productions “for” children, some of which are “not so much for children as about children – in other words, an attempt from an adult perspective to recapture and explore lost innocence,” if I may borrow from a not so positive review by the English opera critic Rupert Christiansen of a double Sendak production at the Aldeburgh Music Festival in 2012.

Sendak produced an animated Really Rosie for television, featuring the voice of Carole King, he collaborated with others several times staging and filming Where the Wild Things Are,  his book Bumble Ardy was an outgrowth of his Sesame Street segment of the same name, and he designed sets for operas and ballets, including The Magic Flute and the Nutcracker. He collaborated on more than one operatic production of Higglety-Pigglety Pop.

The set of Bard’s production was true to Sendak.  As we sat waiting for the show to start we viewed the street above, without Cat the Milkman and his truck, who arrived later.  I  had never seen a LED screen set before and found it fascinating to watch as the movement of the backdrops focused my attention on Plant in her window, or Jennie in the milk truck.  It was as if someone were reading the story to me pointing out the characters and actions in the pictures as she read.  Wish I could show it to you. 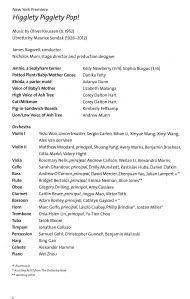 I watched the animated/costumed version of Pop online before going to the theater — eh, so/so: I liked Bard’s production so much more— and reread the book to refresh my memory of the story. The Bard production was in the original English but still the words were often impossible to decipher. The text was streamed, but barely legible, and a bit awkward across the top of the stage. I was glad I did my homework. The book was available at the local library the day before the performance which amazed me actually, because I would have thought other opera goers would have taken it home to read. 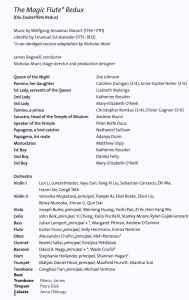 It’s a pity that there were no reviews in the press. The cast, musicians and crew were wonderful. Kelly Newberry performed the role of Jennie and stole my heart.  The amount of time and energy that went into these two-nights of performance must have been enormous. The credits are copied here from the program so that the participants will go down in history, although just today I found a promotional article which lists the singers.  Someone told me that the operas were professionally filmed. Hope so.

Meeting Jennie has brought new life to my relationship with my little Brino and my love of him is mingled with my fascination for that brave little white dog who sang so beautifully. His fur has now reached the shaggy stage and he

soon will be ready for his summer puppy cut. The way he is now tho, he would look good on the end of long stick wiping the cobwebs from the corners of the rooms in my house. That sounds like something Jennie would have been game to do before she became a star.

Perhaps you had to be there.