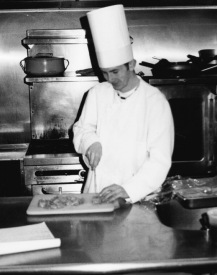 My older son worked in restaurants while in school, during the summer, and when out of work. In fact my younger son worked in restaurants — how could I forget? I’m pretty sure both Sarah and Sam, their wives, did also.  Morgan at the old wonderful Woodshed in Moultonborough, Egg in Brooklyn, even Chili’s in Nashua, someplace on Martha’s Vineyard, at a few ski resorts, and Alex at Court Street Grocers again in Brooklyn, both of them at our Olde Orchard Inn. They washed dishes, cleaned the stove, threw pizzas, shucked oysters; worked the line and the register; expedited, managed, served, and played various roles at our bed and breakfast. 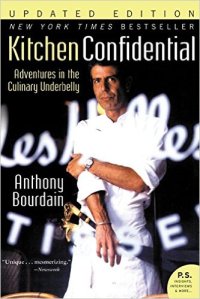 They told stories of course, but nothing like those of Anthony Bourdain in Kitchen Confidential, which came out in 2000. I read it, learned from it, cringed at parts of it.  It was a peak into what went on in kitchens and what happened after the kitchens closed. It was a frenetic read, but thankfully it was neither of my son’s lives.

I never forgot the book, in fact thought of it often, but never followed Bourdain nor watched his series. Now Journeyman, the article in a recent New Yorker has Bourdain calling to me again and hopefully I’ll catch up.  He is not, yet he is, the same man whose book I read.

Why my inerest? His life, his work, his experiences are legend.  He’s been everywhere, eaten everything, gets to film it, write about it.  President Obama had lunch with him on one of his adventures.  So cool.  Would I like to go on  one of those adventures?  Not so sure I could do it.  I once invited myself to lunch with Norman Mailer and then could barely say a word.

All through the  New Yorker article I found snippets that made me think of my children, quotes to send them or not send them. I usually have to think it through — how often to email, call or text. How often to intrude into their already full adult lives.  These are important decisions for a mom who is so proud of and so loves her sons and their wives but doesn’t want to be over-momming it.

Instead I’ll write them here.  Perhaps they will read them some day.

For Morgan, who has done research on New York City’s food carts, and who with his wife Sarah works at the NYC Department of Health & Mental Hygiene, this quote from Bourdain describing his proposed Pier 57 “market modelled on Singapore’s hawker centers or open-air food courts.”  Bourdain plans to bring in the “best street-food vendors” recruited “from around the world and awarded visas — assuming that the United States is still issuing them — ”

Singapore’s orderly hawker markets combine the delights of roadside
gastronomy with an approach to public-health regulation that could pass
muster in post-Bloomberg New York. They cracked the code with out
losing this amazing culture.

For  Sam, who writes for Food 52, and Alex who is a frequent commenter, this clip on Bourdain confessing that he now seeks to “capture how people go about their daily lives amid violent conflict” while filming Parts Unknown — ”

As ‘Parts Unknown’ has evolved, it has become less preoccupied with food and
more concerned with the sociology and geopolitics of places Bourdain visits. . .
To viewers who complain that the show has become too focussed on politics, Bourdain responds that food is politics: most cuisines reflect an amalgamation of influences and tell a story of migration and conquest, each flavor representing a sedimentary layer of history.  He points out that most shows about food are premised on a level of abundance that is unfamiliar in many parts of the world.

Go Sam!  We all knew you were right to bring politics onto the website!

I’ve got a good one for my buddy Lee, who’s a firm believer in “if it doesn’t kill you it will make you strong” as he judges the edibility of some morsel that I question.  It’s a conversation of Bourdain’s with Stephen Werther, his partner in his new market project, and Stephen Alesch of Roman and Williams, the design firm which has agreed to work on the Market.  They are talking about those Asian food vendors again. “The new frontier for American tastes is fermentation. . . That’s funk. . . Aged steaks. . . Age is code for rot. .  . Cured.”

“Alcohol is the by-product of yeast,” Stephen Alesch chimed in.  It’s the
piss of yeast.”

“Basically , what we’re saying is that filth is good,” Bourdain concluded.

And I found one for me. Bourdain’s publisher Dan Halpern from Ecco and HarperCollins says of Bourdain —

“He can’t believe his luck. He always seems happy that he actually is Anthony Bourdain.”

I am so lucky too!

Last night, after putting this post to bed for a quick review in the morning before publishing, the thought came to me that there was still more to do. Netflix streams Parts Unknown.  I watched the first episode, filmed in 2013, in Myanmar.   Bourdain presents an interesting, colorful travelogue, integrating the life of the people with the food of the country.   His dining companions spoke out loud, but guardedly, of their new freedoms. The story is out of date because the papers today are filled with atrocities against the Rohingya, and I was left wondering what his experience would be if he went back.   Bourdain seemed surprisingly uncomfortable in front of the camera.   I will watch more.

5 thoughts on “The glue here is Bourdain”